Murder on the Orient Express by Agatha Christie 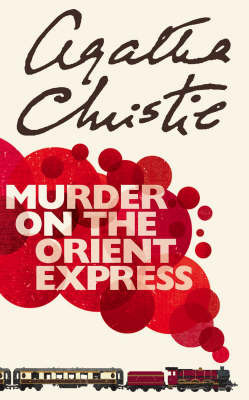 “The murderer is with us – on the train now…”

Just after midnight, the famous Orient Express is stopped in its tracks by a snowdrift. By morning, the millionaire Samuel Ratchett lies dead in his compartment, stabbed a dozen times, his door locked from the inside. One of his fellow passengers must be the murderer.

Isolated by the storm and with a killer in their midst, detective Hercule Poirot must find the killer amongst a dozen of the dead man’s enemies, before the murderer decides to strike again…

Another classic brought to you by the legend that was Agatha Christie.

Where did she get these plot twists from?! I loved the conclusion of the mystery surrounding the murder (That’s not really a spoiler, because the title of the book kind of hints at the fact that there’s going to be a murder).

Poirot is one of my favourite detectives of all time. He doesn’t need a CSI-style lab (although I do love watching CSI every now and then) or any high-tech device, he solves mysteries the old fashion way, with his brilliant little grey cells 🙂

I have to confess, at first I thought that a story with ONE setting (ie. a train) would be quite a boring literary mountain to climb, but boy was I wrong…! It didn’t really matter where the scenes were set, each chapter was filled with enough intrigue to keep the story more than interesting.

I feel kind of bad for Poirot though. The poor man can’t even have a decent holiday without being pulled into a murder investigation! If I were him I’d have retired ages ago! Just leave the little Belgium man alone (He doesn’t like being mistaken for a Frenchman!).

I won’t go into a detailed review because I don’t want to spoil the story for you (in case you haven’t read the book yet), so I’m keeping it short and simple. Murder on the Orient Express is a must-read for anyone who enjoys mysteries and detective stories.

A little tip? Don’t feel bad if you can’t figure out who the culprit is before M. Poirot or Ms. Marple do. It’ll just never happen, alright? We might as well acknowledge that now. Agatha Christie will always outsmart her readers.

5 thoughts on “Book Review: Murder on the Orient Express by Agatha Christie”